Localization and functional role of Cav2.3 in the medial habenula to interpeduncular nucleus pathway

Localization and functional role of Cav2.3 in the medial habenula to interpeduncular nucleus pathway 9.65 MB 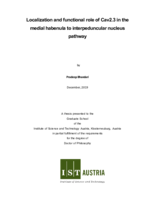 Department
Shigemoto Group
Series Title
IST Austria Thesis
Abstract
The medial habenula (MHb) is an evolutionary conserved epithalamic structure important for the modulation of emotional memory. It is involved in regulation of anxiety, compulsive behavior, addiction (nicotinic and opioid), sexual and feeding behavior. MHb receives inputs from septal regions and projects exclusively to the interpeduncular nucleus (IPN). Distinct sub-regions of the septum project to different subnuclei of MHb: the bed nucleus of anterior commissure projects to dorsal MHb and the triangular septum projects to ventral MHb. Furthermore, the dorsal and ventral MHb project to the lateral and rostral/central IPN, respectively. Importantly, these projections have unique features of prominent co-release of different neurotransmitters and requirement of a peculiar type of calcium channel for release. In general, synaptic neurotransmission requires an activity-dependent influx of Ca2+ into the presynaptic terminal through voltage-gated calcium channels. The calcium channel family most commonly involved in neurotransmitter release comprises three members, P/Q-, N- and R-type with Cav2.1, Cav2.2 and Cav2.3 subunits, respectively. In contrast to most CNS synapses that mainly express Cav2.1 and/or Cav2.2, MHb terminals in the IPN exclusively express Cav2.3. In other parts of the brain, such as the hippocampus, Cav2.3 is mostly located to postsynaptic elements. This unusual presynaptic location of Cav2.3 in the MHb-IPN pathway implies unique mechanisms of glutamate release in this pathway. One potential example of such uniqueness is the facilitation of release by GABAB receptor (GBR) activation. Presynaptic GBRs usually inhibit the release of neurotransmitters by inhibiting presynaptic calcium channels. MHb shows the highest expression levels of GBR in the brain. GBRs comprise two subunits, GABAB1 (GB1) and GABAB2 (GB2), and are associated with auxiliary subunits, called potassium channel tetramerization domain containing proteins (KCTD) 8, 12, 12b and 16. Among these four subunits, KCTD12b is exclusively expressed in ventral MHb, and KCTD8 shows the strongest expression in the whole MHb among other brain regions, indicating that KCTD8 and KCTD12b may be involved in the unique mechanisms of neurotransmitter release mediated by Cav2.3 and regulated by GBRs in this pathway. In the present study, we first verified that neurotransmission in both dorsal and ventral MHb-IPN pathways is mainly mediated by Cav2.3 using a selective blocker of R-type channels, SNX-482. We next found that baclofen, a GBR agonist, has facilitatory effects on release from ventral MHb terminal in rostral IPN, whereas it has inhibitory effects on release from dorsal MHb terminals in lateral IPN, indicating that KCTD12b expressed exclusively in ventral MHb may have a role in the facilitatory effects of GBR activation. In a heterologous expression system using HEK cells, we found that KCTD8 and KCTD12b but not KCTD12 directly bind with Cav2.3. Pre-embedding immunogold electron microscopy data show that Cav2.3 and KCTD12b are distributed most densely in presynaptic active zone in IPN with KCTD12b being present only in rostral/central but not lateral IPN, whereas GABAB, KCTD8 and KCTD12 are distributed most densely in perisynaptic sites with KCTD12 present more frequently in postsynaptic elements and only in rostral/central IPN. In freeze-fracture replica labelling, Cav2.3, KCTD8 and KCTD12b are co-localized with each other in the same active zone indicating that they may form complexes regulating vesicle release in rostral IPN. On electrophysiological studies of wild type (WT) mice, we found that paired-pulse ratio in rostral IPN of KCTD12b knock-out (KO) mice is lower than those of WT and KCTD8 KO mice. Consistent with this finding, in mean variance analysis, release probability in rostral IPN of KCTD12b KO mice is higher than that of WT and KCTD8 KO mice. Although paired-pulse ratios are not different between WT and KCTD8 KO mice, the mean variance analysis revealed significantly lower release probability in rostral IPN of KCTD8 KO than WT mice. These results demonstrate bidirectional regulation of Cav2.3-mediated release by KCTD8 and KCTD12b without GBR activation in rostral IPN. Finally, we examined the baclofen effects in rostral IPN of KCTD8 and KCTD12b KO mice, and found the facilitation of release remained in both KO mice, indicating that the peculiar effects of the GBR activation in this pathway do not depend on the selective expression of these KCTD subunits in ventral MHb. However, we found that presynaptic potentiation of evoked EPSC amplitude by baclofen falls to baseline after washout faster in KCTD12b KO mice than WT, KCTD8 KO and KCTD8/12b double KO mice. This result indicates that KCTD12b is involved in sustained potentiation of vesicle release by GBR activation, whereas KCTD8 is involved in its termination in the absence of KCTD12b. Consistent with these functional findings, replica labelling revealed an increase in density of KCTD8, but not Cav2.3 or GBR at active zone in rostral IPN of KCTD12b KO mice compared with that of WT mice, suggesting that increased association of KCTD8 with Cav2.3 facilitates the release probability and termination of the GBR effect in the absence of KCTD12b. In summary, our study provided new insights into the physiological roles of presynaptic Cav2.3, GBRs and their auxiliary subunits KCTDs at an evolutionary conserved neuronal circuit. Future studies will be required to identify the exact molecular mechanism underlying the GBR-mediated presynaptic potentiation on ventral MHb terminals. It remains to be determined whether the prominent presence of presynaptic KCTDs at active zone could exert similar neuromodulatory functions in different pathways of the brain.
Keywords
Cav2.3; medial habenula (MHb); interpeduncular nucleus (IPN)
Publishing Year
2020
Date Published
2020-02-28
Acknowledged SSUs
Electron Microscopy Facility
Page
79
ISSN
2663-337X
IST-REx-ID
7525

This Item is protected by copyright and/or related rights. [...]

Search this title in